Serbian folk costume holds a prominent place in the culture and tradition of the Serbian people. It’s role throughout history is very important as a symbol of ethnic identity, and it stands out in terms of art and aesthetic values. To this day, most of the clothing items from the 19th and the first decade of the 20th century have been preserved with a variety of forms and ornaments in both women’s and men’s costumes.

Each area inhabited by Serbs throughout history was characterized by a special folk costume. By the way a person dressed, was recognizable not only where he/she came from, but also to which ethnic or national community he/she belonged.

During their historical development, folk costumes have had multiple meanings in the life of the people, but various costumes were also exposed to numerous influences between different ethnic groups.

In addition to cultural and historical factors, the forming of clothing characteristics was significantly influenced by the nature of soils and climatic conditions that provided certain benefits for the development of one or more ways of running a business, in which products formed the basis of life and all the accompanying elements.

The clothes were almost entirely handmade by women for their household.

Their work included work on the cultivation and processing of textile raw materials, dyeing, weaving linen and woolen fabrics, knitting, tailoring, sewing, embroidering, lace making and other applied ornaments. Experience and skills were passed from older to younger, from generation to generation, and folk costumes over time became a trademark of Serbian tradition.

The jelek (turkish word) is a type of sleeveless vest worn both by women and men. The cut of the vest varried from area to area, in patterns, shape, material and details. Jelek is usually made from woolen cloth or plush. This vest was worn over the anterija or  shirt and was richly decorated with embroidery, silver or golden thread, silk, silk braids, etc.

Fermenis the word used to call the men’s vest in Šumadija and western Serbia. It was decorated with braids, which was mostly done by abadžija. The ornaments and motifs on the vest indicated different areas, but also the depth of the pocket. The number of braids on the vest reflected the wealth of the family. The women’s vest was more lavishly decorated, sometimes even with gold silk.

The anterija is a type of an antique long dress with deep neckline and wide open sleeves. The materials used were various: cotton, silk, velvet, brocade. They were usually red or purple, with narrow white stripes or small motifs, and those with gold embroidery were considered luxurious.The taylors who made them were called terzije. The origin of the word comes from the Turkish word terzi, which means čoja (type of cloth). The tailors mostly sewed for the civil population.

Opanak, which over time has become one of the symbols of Serbia and a frequent souvenir that tourists take with them brought from here, is traditional footwear used in medieval Serbia. It is made of leather, without many laces or shoelaces, lasts a long time, and is pointed in shape  ending on the toes. The shape of the pointed end of the opanak designates the part of Serbia from which it originates, and the name dates from the Romanian word “apinci“.

Today’s form of opanaks was formed at the beginning of the 20th century.They were made with the help of molds, which differed only in number, whether they were men’s, women’s or children’s. It is interesting that the right and left opanak did not differ, but only one shape was made in the size from 19 to 47. A large amount of leather is needed to make opanak, especially for the upper part, which is composed of small leather straps.It is also the most beautiful and most decorative detail on Serbian shoes,which is completely autochthonous. The decoration on the shoes was made in the past from dogs skin, which is soft and suitable for making details, but today is used goats skin.

Almost every city in Serbia has a collection of costumes characteristic of that region in its museum. The most important collections of folk costumes in Serbia are in the Ethnographic Museum and Manaks house, which is also under the auspices of the Ethnographic Museum. In addition to these two Belgrade museums, the museum in Zajecar has a significant collection of zubun, and in the museum of Vojvodina the emphasis is on the basic type of costume of this region – Pannonian.

The process of liberation from oriental influences and accepting European fashion was gradual – even shortly before the middle of the 19th century, a symbiosis took place in the liberated part of Serbia elements of Levantine-Balkan clothing and European fashion costume in the so-called Serbian civic costume, which has become a typical pattern of women’s clothing in Serbian cities.

In Serbia, folk costumes are mostly used by folklore clubs, as well as some choirs and orchestras, but it is poorly used in other branches of art.

Films and series inspired by Serbian history can often be seen lately on the big screen, as well as on small screens. In the film and series “Nečista krv” (“Bad Blood“), which was also on Netflix platform, we have the opportunity to see what urban and rural clothing looked like in the Serbian population, as well as the clothes of other people who inhabited or visited Vranje during the second half of the 19th century, and the costume designer is Marina Vukasović Medenica.

We can conclude that in Serbia the interest of young designers in tradition is modest, that is, out of nowhere there is an interest in the tradition, they did not acquire it during school, but they developed that love through the family heritage. For the first acquaintance and development of love for the traditional techniques of embroidery, knitting, crocheting, weaving, the technique of making carpets and tapestries we can thank grandmothers who nurtured this family heritage and passed it on to their children and later to their grandchildren.

The interest of young designers to learn traditional techniques more thoroughly is great, as is regarding embroidery, patterns, weaving and making parts of folk costumes, as well as getting to know other cultures in the Balkans, through their costumes, jewelry and old crafts.

All this can bring us a better understanding of history, thus indirectly building peace we contribute to one of the still most important and sensitive topics in the Balkans. We have a chance to, in the best possible way, by supporting young people and developing creativity, work on the preservation of tradition and peacebuilding in the region. 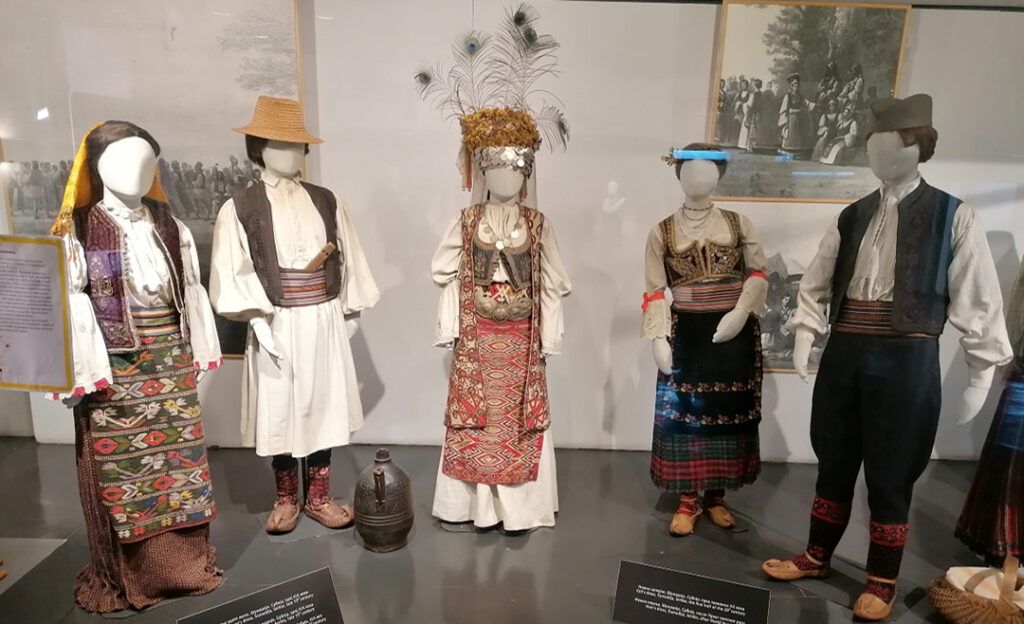